It was added as Hero Vehicle in the Death Star expansion pack and is playable in Fighter Squadron and Battle Station. It is the second vehicle to be added via DLC.

When the Advanced is present on the battlefront, two players will be able to spawn next to the vehicle and play as Vader's Imperial Aces. These two Aces have the respective call signs of Victor 2 and 3.

Darth Vader's TIE Advanced x1 is a very capable and manuverable fighter. It can turn and accelerate better than most other starfighters and can lay down multiple laser barrages, which can cut down even the most fortified enemy fighters. 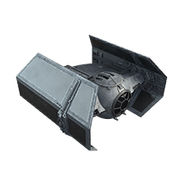