watch 04:21
Wiki Targeted (Games)
Do you like this video?
Play Sound

In the first Battlefront, Darth Vader appears only in select campaign missions and in any Imperial Galactic Conquest battles in which the hero bonus is activated. Additionally, Darth Vader cannot be controlled. Instead, he spawns at the start of the match and will proceed to eliminate enemy soldiers until the end of the match or until he is thrown off the map area.

His only ability is his lightsaber. He can deflect all blaster fire, including rocket launcher shells. This makes him impervious to all forms of damage, although Darth Vader will still react with explosives near him, allowing him to be thrown off a ledge.

Darth Vader is a slow but powerful fighter who wields a red-bladed lightsaber. His attacks consist of swift, powerful slashes. Vader is one of the slowest characters in the game, moving at a walking pace, which limits his range when attacking. Vader is capable of levitating through the Force, known as force flight, which allows him to reach higher altitudes despite his lack of agility. This ability is tied to his stamina bar. When jumping, Vader is able to attack with a single swipe, which brings him down to ground level. When sprinting, Vader can attack with a powerful horizontal slash which ends his sprint but, if timed correctly, can even take out a Wookiee Warrior.

Darth Vader as he appears in Battlefront I. 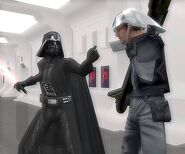 Darth Vader doing what he does best.

Darth Vader from another angle.

Darth Vader on the Tantive IV.

A player trying to snipe Darth Vader in Battlefront I.

Retrieved from "https://battlefront.fandom.com/wiki/Darth_Vader/Original?oldid=80046"
Community content is available under CC-BY-SA unless otherwise noted.