The Death Star is a huge battlestation with enough power to destroy entire planets. The Emperor's Battlestation becomes the base of the Empire, but it was destroyed by Luke Skywalker. This map features two hangers, a Cell block, and the fire control room.

The Death Star is a gigantic super weapon built by the Galactic Empire. Its building specs are seen in Episode II: Attack of the Clones, when Count Dooku takes them prior to leaving Geonosis. The Death Star was first seen in Episode IV: A New Hope, when the Millennium Falcon is pulled into one of it's many hangars via a tractor beam. It also has the ability to destroy an entire planet as seen in Episode IV: A New Hope. It is where Obi-Wan met his demise. After it is destroyed by Luke Skywalker at during the Battle of Yavin, a second Death Star was built. At the end of Episode VI: Return of the Jedi, this too was destroyed.

Recognizable features in the game include: The detention blocks where Princess Leia was kept and it's neighboring garbage room, one of the super lazer's fire rooms which shows the lazer charging up and firing, the tractor beam generator room, the Hangar where the Millennium Falcon docked, the Hanger where tie fighters are, the bottomless air shaft with extendable bridges, the tractor beam pit(also bottomless),and the conference room where Darth Vader, Grand Moff Tarkin, and other Imperial leaders met. This map includes narrow corridors, in which you could use the lightsaber throw hero move to pick off all enemies in the passage including the detention block. The Death Star is a huge armored space station, so strong that it is capable of destroying planets in one go. Ever since it was built, the rebellion tried to find the plans to destroy this massive threat. After years of searching; the rebels finally found the plans and launched a massive head strong attack on the Galactic Empire. That attack was known as the Battle of Yavin. The rebels started losing near the end of the battle, but eventually Luke Skywalker destroyed the Death Star with proton torpedoes from his X-Wing.

An interior view of the Death Star. 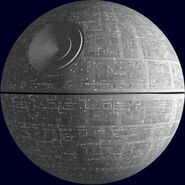 A Stormtrooper falls to his doom

Below view of the intricate metal platforms
Add a photo to this gallery
Retrieved from "https://battlefront.fandom.com/wiki/Death_Star:_Interior?oldid=97095"
Community content is available under CC-BY-SA unless otherwise noted.