The Death Star II is a location featured in DICE's Star Wars Battlefront II. Located in orbit over the Forest moon of Endor, the battle station was used to lure the Rebel Alliance into a trap, culminating in one of the key battles of the Galactic Civil War, the Battle of Endor.

The Death Star II is a partially-constructed battle station, built following the destruction of the first Death Star. Larger than its predecessor, the station boasted a more powerful armament, including an upgraded superlaser. Initially constructed in secret over Endor, the station's existence - along with the location of its planetary shield generator - was deliberately leaked to the Rebel Alliance by the Galactic Empire in order to bait them into attacking the incomplete superweapon. Though the Imperial ruse was successful, the Death Star II would eventually be destroyed following the successful sabotage of its shield generator on Endor - allowing Rebel starfighters to infiltrate the partially-constructed station and compromise its reactor core.

The station's explosion was witnessed by Inferno Squad, who were present on the moon following the destruction of the shield generator. Following the battle, much of the Death Star's debris remained in orbit over the forest moon.

An under-construction portion of the station.

One of the Death Star's smaller hangars.

One of the station's main hangars.

The Death Star II as it appears in the campaign. 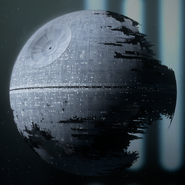 The battle station's model as it appears in the in-game menu.