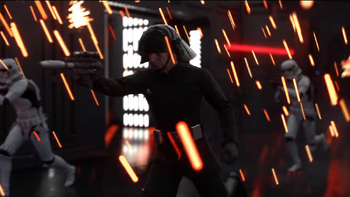 25,000 Credits
The Death Star Trooper, also known as the Imperial Navy Trooper, is a body customization option in Star Wars Battlefront. It unlocks at Level 80 and can be purchased for 25,000 credits.

Introduced in the Death Star expansion pack, this body customization option allows players to change their Imperial stormtrooper outfit to that of an Imperial Death Star Trooper.

Imperial Death Star Troopers were elite Imperial Navy Troopers that were stationed on the first and second Death Stars. They never partook in battle unless if it was aboard the station. They were formed by Grand Moff Wilhuff Tarkin for security and operating the Death Star's Super laser alongside with Death Star Gunners.

Unlike the Imperial stormtrooper body, players can cycle through all the human head customization options they've purchased and equip them on the Death Star Trooper. The Sullustan, Duros, Rodian, Ishi Tib, Quarren, Twi'lek, and Weequay head options cannot be equipped, due to the Emperor's predjudice thoughts.

Death Star Troopers are outfitted in a black uniform secured by a belt with three silver attachments on the front. They have a large, protective helmet chin-strapped to their head and wear black gloves and black boots.

Retrieved from "https://battlefront.fandom.com/wiki/Death_Star_Trooper?oldid=86841"
Community content is available under CC-BY-SA unless otherwise noted.