In Star Wars Battlefront, Death Troopers are the bodyguards of Director Krennic. Their abilities differ from the other types of bodyguards in the game, which both have a Homing Shot and Smart Rocket ability. Death Troopers, in contrast, have three abilities: Thermal Imploder, Cooling Cell, and a Smart Rocket.

DLT-19: Death Troopers wield a more powerful version of the DLT-19 Heavy Blaster as their primary weapon, allowing them to quickly dispatch enemies from close-to-medium range.

Thermal Imploder: Death Troopers can throw a Thermal Imploder with their first ability. It delivers nearly the same feel as the imploder you get as a pickup.

Smart Rocket: The Death Trooper's third and final ability, and the only ability that it shares with the other bodyguards. Can be used on vehicles and large groups of enemies.

While Death Troopers will naturally want to stay close to Director Krennic in order to receive the armor boost as well as the increased cooldown speeds on their abilities, they are generally more powerful in close quarters. This is where large groups of enemies are, and the Thermal Imploder and Smart Rocket will kill more people per shot. For open areas, avoid using the Thermal Imploder, because it takes too long to detonate, giving the enemy time to escape. If both the Imploder and Smart Rocket are on cooldown, use the Cooling Cell when facing large groups of enemies to boost your firepower, as this will give you significantly more shots before you will have to cool your weapon. Don't leave Krennic while facing enemies, as you have very little health and can die incredibly fast.

"The elite soldiers of Imperial Intelligence, Death Troopers live up to their name through skill, deadly weaponry, and superior armor."
— In-game description

Death Troopers pack a punch with their E-11D. Their armor also grants them additional health above normal infantry and they come into the battle with a Sonic Imploder that concusses nearby enemies while dealing damage. As such, Death Troopers are best used to disorient and overwhelm their opponents with effective use of their precise blasters, using overload to increase this rate of fire to an even greater amount, high health, and Sonic Imploders that concusses enemies as well as dealing damage.

Original in-game icon for the Death Trooper, found in the Beta files. 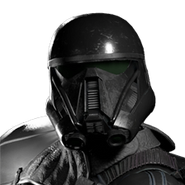 The Death Trooper with its former DLT-19 in the Collection inspect menu.