"Soon I will be the Emperor's closest confidant."
— Intro Dialogue

Orson Krennic was the Director of the Empire's Advanced Weapons Research division. He was added as a hero in the Rogue One: Scarif expansion pack. He wields the DT-29 Blaster Pistol as his primary weapon and is accompanied by two Death Troopers: intimidating servants of Imperial Intelligence who serve as his bodyguards. He is the final hero added to the reboot.

Krennic is a primarily defensive hero. His high-damage blaster combined with the shield provided by his C2-B5 droid, his Death Trooper bodyguards, and the bonuses that he gives to his allies make him very useful in holding off Rebel advances. His trait, Motivator, gives armor bonuses to any allies standing near him. He also gains armor himself when surrounded by friendly units, making him a very team-focused hero. The more soldiers within his vicinity, the bigger his trait becomes.

Orson Krennic has excessively high damage, but should he be confronted, he has very bad armor. He is best used as either a defensive front or as ambusher and is extremely effective when the enemy's attention isn't on him. If you have good aim and clear lines of sight (Cloud City, Bespin is a fantastic map for this), always use the armor breaker, as it will instantly kill any infantry standing close to the shot, do significant damage and considerably lower the armor of a Hero, and one shot any aircraft. Try to use the C2-B5 droid to defend your flank, and pop out of its shield to pick off enemies. Wrath of the Empire is great when your troops are trying to push through a doorway. Generally, Krennic isn't the spearhead of an attack. He is the artillery. Use Darth Vader, Dengar, or Death Troopers as meat shields/distractions. Also, use the Astromech whenever your objective is an uplink or shuttle, the Dioxis gas is very powerful and can kill enemies with ease. A good strategy is to set up the C2-B5 astromech in a hallway, that way any enemies running through will be affected. Deploy your astromech near a Rebel base as this will block Rebels charging through. This is also a great defense against heroes like Luke Skywalker. Only use the Armor Breaker ability when enemies are far and are fighting teammates, as it will be difficult to fight off foes that are close, and may lead to your demise if the number is high. His normal gun is best used when confronted by an enemy hero like Luke, as his armor breaker has a long recharge rate and can easily miss. 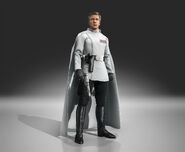