"Notorious for its destructive weaponry and powerful shields, the droideka was a flexible defender able to swiftly relocate from one tactical position to another."
— In-game description

The Droideka, also known as the Destroyer droid, is an Enforcer Reinforcement unit for the Separatists in DICE's Star Wars Battlefront II. It was released in the Where are those Droidekas? Update on June 26.[1]

The Droideka is a powerful and mobile Enforcer unit for the Separatists. Droidekas are armed with twin blaster cannons, which can deal significant damage to enemy players within a short-range and deal small amounts of splash damage. The splash damage helps the Droideka in harassing enemy Heroes that are blocking, along with dealing minor chip damage to enemies hiding behind cover. However, these blasters will lose their effectiveness over range quickly, and can only be fired when the Droideka is in its walking form. Droidekas can further increase their rate of fire with their central ability, Overload, allowing them to shoot their twin blaster cannons for a sustained period of time without overheating.

While Droidekas move slowly in their normal form, or their "Destroyer" mode, they can use their Wheel Form ability to fold into their chassis and roll around maps at higher speeds. While Droidekas possess a large health pool, they can still be quickly overwhelmed by enemy fire due to their low mobility and large profile while in walking form. To increase their survivability, Droidekas can fortify their position by using their Energy Shield along with gaining 50% damage reduction when in Wheel Form. Droidekas can shoot through their own shields while using them, unlike the Personal Shield, although their own shields are just as susceptible to ion weaponry. Melee and lightsaber attacks can also easily damage a Droideka through its shield.

The Droideka model is so big it doesn't fit in pathways meant for troopers to pass through. DICE defended the concept because there were different variants of Droideka in the Star Wars Canon and they chose a big one (it's even taller then Anakin Skywalker). The problem with it is that now if you get a Droideka you can't follow your fellow troopers and heroes to certain places because you can't fit. Sometimes if you spawn in a room that the only routes out are narrow doorways, you're literally stuck inside. Sometime later the AI became able to use the Droideka, and it too gets stuck in narrow doorways because its programming can't understand the Droideka doesn't pass through narrow doorways.

Rolling with the shield active[]

There's a glitch that allows a Droideka to have an invisible but fully functional shield while rolling. This glitch came with the Droideka's release and was never addressed. Not only that, but it also allows the droideka to pop its normal shield on top of the invisible one, almost doubling the total damage it can sustain.

Work in-progress shot of the Rollie. 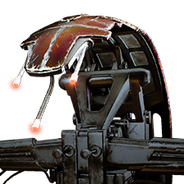 In-game icon for the Droideka.