Droidekas are one of the two special units only available to the CIS. Their Repeating Blasters shoot rapidly (even though they will eventually overheat) and can even be used when the shield is destroyed, giving the unit a big advantage. Also, droidekas can roll up into a ball and travel very quickly around the map by hitting the crouch command. Their shields cannot be deployed while rolled up and you cannot obtain the flag in this manner either. Droidekas are easily weakened once their shields are depleted, so be careful in enemy territory. This unit is best put to use as a support unit, an obstacle in hallways and quick hit-and-run tactics. When standing, they walk very slow. They are used widely because of their versatility.

They are a rare sight in online matches due to the difficulty in unlocking them. In addition, Droidekas are the only infantry class that is immune to headshots since it lacks a proper head hitbox. 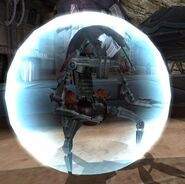 A Droideka on Utapau.

a Droideka on Kamino in Star Wars Battlefront I.

A Droideka on Geonosis.

Like the MagnaGuard, the Droideka does not change its skin on any map.

Retrieved from "https://battlefront.fandom.com/wiki/Droideka/Original?oldid=99991"
Community content is available under CC-BY-SA unless otherwise noted.