The E-5 is the default Blaster Rifle available for the Battle Droid in DICE's Star Wars Battlefront II. An enhanced version of this weapon is used by the Commando Droid.

As a default weapon of the Assault class, all of the statistics for this weapon are identical to the stats of all the other default Assault weapons in the other factions. This means the E-5 is good overall, but excels at nothing. This also means weapon modifications can not be equipped on this weapon which limits its battle potential.

The E-5 deals a good amount of damage and is most effective at close to mid-range, where it is better at standing up to the other weapons for the Assault class. It also has manageable recoil, making possible to eliminate an enemy from long range. This weapon can outmatch certain pistols and blaster rifles at medium range. Like most other weapons, the best way to use this weapon is to aim for the head to take advantage of the increased headshot damage.

E-5 in the Collection menu 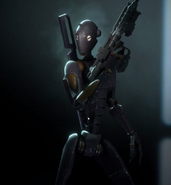 Commando Droid with a Modified E-5
Add a photo to this gallery
Retrieved from "https://battlefront.fandom.com/wiki/E-5?oldid=101549"
Community content is available under CC-BY-SA unless otherwise noted.