Emperor Palpatine is a Galactic Empire Hero in DICE's Star Wars Battlefront. He acts as the Empire's support Hero, serving as the equivalent to the Rebel Alliance's Leia Organa.

Despite looking frail and weak, Emperor Palpatine is equipped with a variety of combat and support abilities to help turn the tide of battle. Darth Sidious can also use the Force to block a variety of attacks and weapons.

Emperor Palpatine is equipped with the following abilities:

"You will all die as one!"
— Upon using Chain Lightning
"You will all perish!"
— Upon using Chain Lightning
"I will leave you a burning husk."
— Upon using Chain Lightning
"I am all-powerful!"
— Upon attacking an enemy with standard Lightning
"You dare approach me?!"
— Upon being damaged
"Use this to smash their lines."
— Upon dropping Imperial Resources/Hero Health Drop
"A gift from your Emperor."
— Upon dropping Imperial Resources/Hero Health Drop
"Such fragile creatures you are. *laughs*"
— Upon killing multiple enemies in quick succession
"I wonder if your feelings on this matter are clear."
— Emote
"I am quite safe from your pitiful band."
— Emote
"Everything is proceeding as I have foreseen."
— Emote
"It'll take more than that to stop me."
— Upon being attacked
"Now you die!"
— upon using lightning
"I will burn you all to the ground."
— when attacking opponents
"You are nothing but insects."
— Upon killing a soldier
"You are only delaying the inevitable."
— while in combat
"Skywalker is not far"
— When Luke Skywalker is nearby

Palpatine's Force Lightning was buffed to drain significantly more slowly than it did at launch, in addition to the Hero Health Pickup being made nearly twice as effective.

"Emperor Palpatine eliminates whole groups of enemies at a time using his powerful manipulation of the Force to slow, stun, and pummel them with lightning."
— In-game description

Emperor Palpatine returns in DICE's Star Wars Battlefront II as a Hero for the Galactic Empire and the First Order.

The sinister ruler of the Galactic Empire and Final Order is a daunting opponent. The Emperor's mastery of the dark side allows him to wield terrifying powers against the forces of good. Compared to the previous game, his main force lightning attack has been drastically weakened. It now deals far less damage, runs out of energy faster and does not prevent enemies from retaliating while they are being damaged by it. Palpatine is also now completely unable to block attacks directed towards him, making him weaker in a straight-up fight.

Palpatine's force lightning attack behaves a little differently in that it is now a two-part attack. Palpatine can now cast force lightning with both of his hands individually, both the left and right hand have separate overheat mechanisms, meaning that alternating back and forth between the left and right hands allows the player to sustain a constant barrage of lightning, albeit with a far weaker damage profile. To compensate for this however, using lightning with only one hand allows the lightning to spread to multiple targets standing near each other. As a third alternative, the player can also cast force lightning using both hands simultaneously, providing double damage in exchange for a noticeably faster overheat.

Palpatine's ability setup has also been changed. He retains the Chain lighting ability but is no longer able to spawn health pickups or use Force Dash. Those abilities have been replaced with Dark Aura and Electrocute, and the latter has been replaced with a much more usable substitute for the combat roll.

"Using both of the Emperor’s hands together will deliver a much more damaging lightning attack--but at the cost of a greater drain on the player’s Stamina."
— First hint
"The Emperor’s Dark Aura slows and damages targets within its area of effect."
— Second hint
"The Emperor is at his most powerful when he is engaging with multiple enemies at close range"
— Third hint

"Good! Let the hate flow through you!"
— First emote
"Do what must be done! Do not hesitate, show no mercy!"
— Second emote
"Now, at the end, do you understand."
— Third emote
"Now you will experience the full power of the dark side."
— Fourth emote

"Luke: There's still good in my father.
Palpatine: Your father exists within my shadow."
— Banter between Luke Skywalker and Emperor Palpatine

"Palpatine: Do not doubt that you still has much to learn.
Maul: I seek your wisdom as always, Master."
— Banter between Darth Maul and Emperor Palpatine

"Vader: What is thy bidding, my master?.
Palpatine: Remove these insolent creatures."
— Banter between Darth Vader and Emperor Palpatine

"Palpatine: (Laughter) You have grown decrepit with age.
Yoda: Decrepit perhaps, but with age, comes wisdom. Surrender you will not?"
— Banter between Yoda and Emperor Palpatine

Emperor Palpatine in an Imperial base. 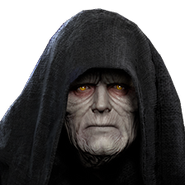