Endor is a verdant forest planet covered in trees and rivers. Home to the native Ewok, animal habitats and Imperial bases stand dotted around its surface.

Sniping is difficult on these maps, as the trees can be used for cover, although small bodies of water can be used to help with that issue.

If Supremacy is played on Forest Moon of Endor, it will take place at early dawn, not in the afternoon like Walker Assault.

Unlike the other maps on Walker Assault, Endor only has one walker on the planet due to the forest's thick canopy, as well as thin entrance for vehicles. This also applies for Bespin, as numerous buildings prevent it from placing more than one to enter. Also, air vehicles such as the T-47 Airspeeder aren't present because of the massive forest, making it harder for Rebels to take the Walker down.

The following is a list of maps set on Endor and the game modes they are playable in:

The following is a list of maps set on Endor and the game modes they are playable in:

An inspirational poster made for the DICE team.

An Ewok village on Endor. 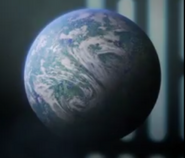 Add a photo to this gallery
Retrieved from "https://battlefront.fandom.com/wiki/Endor?oldid=97833"
Community content is available under CC-BY-SA unless otherwise noted.