Endor is a small forest moon orbiting the gas giant planet of Endor and is the farthest moon away from the planet. The moon is home to the Ewok species and was the location of the Battle of Endor, which was the final fight between the Galactic Empire and Rebel Alliance resulting in the destruction of the second Death Star and the death of Emperor Palpatine.

In the Battlefront series, Endor consists of endless trees covering the majority of the map with ewok villages in the trees. The Death Star shield bunker is also included in this map. There are also a few hollow logs that troops can pass through for cover. The native ewoks will fight alongside the Rebel Alliance to defeat the Galactic Empire in all game modes. Also taken from the movie are the Ewok log traps that can automatically crush an AT-ST when it walks into position. In Hunt the teams consist of Ewoks vs Imperial Scout Troopers. 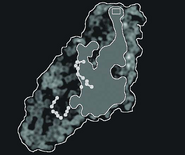 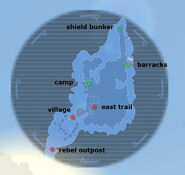 Good Free Cam View of a small portion of the map of Endor.

Endor in Renegade Squadron.
Add a photo to this gallery

Retrieved from "https://battlefront.fandom.com/wiki/Endor:_Bunker?oldid=100009"
Community content is available under CC-BY-SA unless otherwise noted.