"The Ewok Hunter is a tiny yet cunning bundle of fur that hunts its prey with bow, spear, and Wisties."
— In-game description

The Ewok Hunter is an Infiltrator Reinforcement unit for the Rebel Alliance in DICE's Star Wars Battlefront II. It was released on February 26, 2020 as part of The Age of Rebellion Update.[1]

The Hunter plays very similarly to his Ewok Hunt counterpart, but his main weapon is a bow in place of a spear; the spear can still be used by pressing the Melee key.

In combat, the Hunter is a versatile unit that can be used in ambushes and flanks.

The Hunter's bow, when unzoomed, automatically tracks targets, similarly to Lando Calrissian's Sharp Shot ability. While hip-firing deals low damage and has low rate of fire in exchange for target tracking, aiming manually allows the Hunter more control of his bow and inflicts more damage (when charged). The bow cannot lock onto enemies if the Ewok is jumping or running, which means the Ewok must be firmly on the ground in order to lock on. When aiming manually and pulled back fully, the bow one-shots the four default classes and the three Reinforcement units, and deals very high damage to units with higher health, especially Heroes.

The bow can also be used to snipe targets from afar, as it has the same range as a Specialist's sniper, especially when aiming manually.

The Hunter keeps with him a Wisties Pouch that tracks and deals area burn damage to nearby enemies. However, it takes a few seconds to throw, and during those few seconds, the Hunter is vulnerable to damage.

The Hunter can use his Valiant Horn to increase damage output and damage resistance, though the horn is very loud and he will appear on enemy radars for the duration of the ability, alerting enemies to his presence.

"The EWOK HUNTER will automatically find targets to shoot at with its bow."
— First hint
"The EWOK HUNTER can aim manually and build more power with the bow while zooming."
— Second hint
"When staying crouched, the EWOK HUNTER gains faster recharge speed on all abilities."
— Third hint
"Listen for the EWOK HUNTER voice line indicating full bow power when in zoomed mode."
— Fourth hint 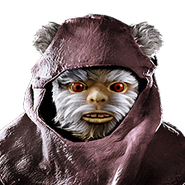 In-game icon for the Ewok Hunter.