Felucia is a planet featured in DICE's Star Wars Battlefront II.[1] A map set on Felucia, Tagata, arrived in Capital Supremacy on September 25, 2019 as part of the Cooperation Update.[2][3] Felucia was the site of many battles during the Clone Wars, the last of which saw the death of Jedi Master Aayla Secura at the hands of the 327th Star Corps when Order 66 was enacted.

Felucia is a remote jungle planet located in the Outer Rim Territories. Felucia is distinctive for its thick and colorful jungles, and is also home to the native Felucians, an agrarian/farmer people who lived in small villages. Because of its abundant, unharvested resources and its location in a prominent trade route, Felucia became a major battleground between the Galactic Republic and the Separatists during the Clone Wars. The final battle of Felucia took place during the Outer Rim Sieges near the end of the Clone Wars between the 327th Star Corps of the Republic and the Separatist droid armies. By the time the Republic had won the battle, Order 66 was enacted, and the 327th Star Corps turned against their Jedi General, Aayla Secura, executing her.

The following is a list of maps that are set on Felucia and the modes that they can be played in:

Promotional image of the Clone Commando on Tagata. 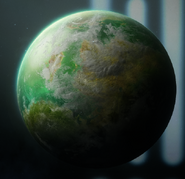