"A successor to the Galactic Empire in all but name, the First Order is bent on taking control of the galaxy. Supreme Leader Snoke has deemed the time ripe to reveal the assembled might of the impeccably trained First Order Stormtroopers, and only the Resistance, led by General Organa, stands ready to oppose Snoke's plans."
— In-game Description

The First Order is a faction in DICE's Star Wars Battlefront II. The Order was founded from the remnants of the Galactic Empire that fled to the Unknown Regions after their defeat by the New Republic, the state formed by the Rebel Alliance, in the Galactic Civil War. They are part of the Dark Side, and their main enemy in the Light Side is the Resistance.

Promotional image of Kylo Ren and First Order stormtroopers on Starkiller Base. 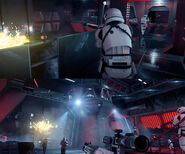 First Order stormtroopers and Resistance fighters in Starkiller Base.

Add a photo to this gallery
Retrieved from "https://battlefront.fandom.com/wiki/First_Order?oldid=79983"
Community content is available under CC-BY-SA unless otherwise noted.