The First Order AT-ST is identical in terms of handling and firepower to its Imperial counterpart. It can be used to lay down fire on Resistance troops and objectives. 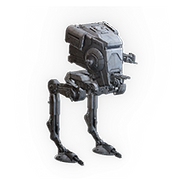 In-game icon for the First Order AT-ST.
Add a photo to this gallery
Retrieved from "https://battlefront.fandom.com/wiki/First_Order_AT-ST?oldid=93539"
Community content is available under CC-BY-SA unless otherwise noted.