"The Flametrooper can lay down fire to effectively block enemy routes. He manages large groups of enemies with his incendiary imploder."
— In-game description

As his name suggests, the First Order Flametrooper uses a flamethrower, the D-93 Incinerator, in battle. Fire is the Flametrooper's specialty, and he also brings into battle an incendiary grenade that creates a fire in an area. The flames have relatively short range, so he is best used in close quarters and narrow corridors rather than open combat, the flames also do varying degrees of damage depending on the angle fired, burn damage is also accumulated even after the player stops throwing. The flametrooper, in the right circumstances, can be very useful as his flamethrower can bypass shields and even other enemies allowing a crafty player to damage mutliple units at any one time. The D-93 flamethrower can also shoot an incendiary orb that deals medium damage to enemies. The Flametrooper is reccommended to kill Jedi in the battlefield, as they cannot deflect flames with their lightsabers, Although unit has an advantage of defeating Jedi, the flamethrower is inaffective towards Scavenged AT-ST 's, rendering the Flametrooper useless against Walkers. 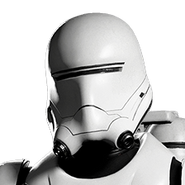