Fast and dangerous, First Order Jet Troopers are cunning soldiers while airborne. They are more maneuverable than other Aerial units, being able to cause havoc to enemy lines with their abilities and weapons.

With the increased jetpack maneuverability and hover feature, this unit is a deadly asset on the battlefront. The Jet Trooper's jetpack works similarly to Boba Fett's jetpack, where you can aim and fly at great speeds. To activate the hover feature you need to fly and scope downwards in mid-air, while it drains less fuel it slowly but surely will empty your tank.

The Jet Trooper's Jet Tackle is similar to Han Solo's shoulder slam, fiercely charging with their jetpack and knocking enemies in front of them backward and disabling them leaving them laying on the floor and in minimal situations, killing enemies outright.

Their Tri-Barrel Launcher deals heavier damage at the cost of heat build-up. They diligently switch to an explosive shot that fires slowly but deals heavy damage. Hovering above heroes and firing on them with this ability will deal considerable damage. 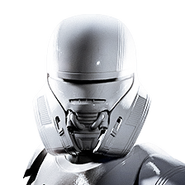