"The First Order Rocket Trooper uses a jetpack to evade and get the drop on enemies."
— In-game description

The First Order Rocket Trooper's SE-44C deals more damage than the one available to the Officer class, and the Cell Mod lowers the heat per shot substantially as compared with the stock SE-44C and even more than the Cell Mod available to the stock version. The low heat per shot means that the Rocket Trooper can keep firing her weapon at enemies and pepper them with blaster fire in order to stop them from regenerating their health. The lowered passive cooldown delay means that the Rocket Trooper is not obligated into venting the SE-44C, and can remain battle-ready in hostile environments. The damage up close also means she can outgun most targets, and can take them down even quicker with headshots. Combining this with the Rocket Launcher and jetpack means that she can pester enemies with her blaster from afar and deal considerable damage when up close.

While the Rocket Trooper's SE-44C deals considerable damage at short-range, the harsh damage drop-off means that the Trooper struggles in long-range engagements. The Rocket Trooper also has considerably low health for a Reinforcement, matching up with the Heavy with only two hundred health before Star Cards are applied. As a result she cannot take much punishment, and must resort to her mobility and cover in order to stay in the fight. If faced with unfavorable odds, she can use two of her abilities, Jetpack Boost and Jetpack Dash, in order to make a quick escape but can also depend on her dodge in order to quickly build space between an enemy or to close the distance with them.

The First Order Rocket Trooper, without the orange Commander pauldron, from the beta. 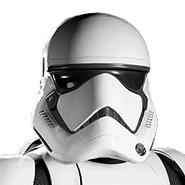