Forest Moon of Endor is a map featured in Star Wars Battlefront. It is playable in Walker Assault, Supremacy, Turning Point, and Skirmish.

The area possesses many trees and a bunker used to keep the shield generator up for the Death Star II. An Ewok Village is present in the second uplink stage, and has many trees, making sniping difficult to do unless small bodies of water are found.

There is a small stream running through the entire map, it ends in a miniature waterfall. It is recommended that Rebels don't venture into this body of water because they will most likely be shot by the AT-AT. So Alliance members should move quickly.

Unlike the other planets that use the same maps, the maps for Walker Assault and Supremacy are slightly different, with the difference being the time of day, Walker Assault is set in the afternoon, whereas Supremacy is set at dawn.

There is only 1 AT-AT present on the map because of the limited room, similar to Cloud City. This gives the Alliance a small advantage, as they only have to deal with one walker. However, the AT-AT has a large amount of health (88,000), and vehicles despite the speeder bike can't be used against it.

Walker Assault on Forest Moon of Endor is more close-quarters than on other maps. Rebellion players can get closer to the walker due to the forest. It is very easy to use Ion Grenades and Thermal Imploders on the walker thanks to the forest. To see in the forest it is wise to use a weapon with thermal (X-8 Night Sniper) and/or Scan Pulse to detect Alliance members on the Imperial side. Stormtrooper armor stands out in the forest, due to its white hue.

The first area of uplinks is at a ramp with a bridge across to a small ditch, and another one is in the bunker, which can be defended much easier due to it being indoors and have massive amounts of space. Just be careful of enemies popping from multiple sides.

The second pair of uplinks take place in the Ewok Village, where one is placed in a small cramp area that holds two turrets to use for defense, and multiple trees and houses many locations for snipers to shoot enemies from the trees or above. The other uplink is on the middle tree and is the most vulnerable uplink, as the area is open towards sniper fire, and has multiple areas to enter towards.

The third and final pair of uplinks are in small depots. These uplinks are neither easy or hard to protect, as there are spots for sniper fire, yet multiple areas for the enemy team to ambush the player. There are also multiple trees and areas that can be used for sniping or numerous amounts of equipment such as crates that can be used to avoid being killed by the enemy. The Rebels must be careful however if the AT-ATs health is more than 50, as the total amount of Y-wings will be their last hope to win the game.

The middle control is at the village, although the control point is exactly on a walkway that leads into some of the trees. The empire has to defend the bunker and the landing platform. The rebels have to defend their camps, which can be defended if the team successfully takes cover and places traps for the enemy team. 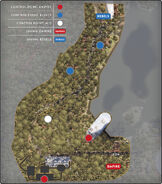 Forest of Endor in Supremacy
Add a photo to this gallery

The first three control points are all located up in the Ewok village. It is recommended that the rebels attack and enter the village from the multiple entrances instead of concentrating their attack on one entrance. The Imperials must defend the control points and should guard the entrance.

The second pair of control points are located in a ditch where one of the uplink stations in Walker Assultise located and the other one is located were two of the paths in the forest meet. The forest provides lots of cover for soldiers to hide.

The last control points are located near the bunker entrance. The rebels can use the forest for cover while the Imperials can use the terrain and scattered crates for cover. It is also here where an AT-ST can be used as the AT-ST pickup located inside the bunker.

The Ewok Village on Endor.

A Scout Trooper on a speeder bike.

Rebel soldiers activating a Squad Shield to protect themselves from an AT-ST.

Forest Moon of Endor at night.

Entrance to an imperial installation on Forest Moon of Endor.
Add a photo to this gallery
Retrieved from "https://battlefront.fandom.com/wiki/Forest_Moon_of_Endor?oldid=91876"
Community content is available under CC-BY-SA unless otherwise noted.