Galactic Conquest is a turn based strategy mode in which players fight for control of the galaxy. This game mode is present within the original Battlefront games, but not the DICE remake.

The introduction of Galactic Conquest into the Battlefront games. In the game mode, players take turns battling the enemy for total control of the galaxy, with the victor of the last battle being the one given the option where to attack next. Each faction has a special ability after four victories, the Republic and Rebellion can take possession of a planet and control it completely, while the CIS and Empire will erase the planet from the map entirely via a blockade or the Death Star.

Each planet has two battlefronts to secure, and after one of them is controlled by each side, the ring surrounding the planet turns white, meaning the planet is contested. After both battlefronts are secured by a side, it will either be green for the player's faction or red for the enemy's faction.

Each planet provides a planetary bonus like sabotage or elite training to help players in a fight, although that ability can be lost if the player loses the battle of the area they chose to attack, and the enemy succeeds in taking one side of the planet the benefits the bonus.

Once the player or enemy captures all of the planets in the galaxy, the enemy home planet will be the final planet left to attack, (Kamino for Republic; Geonosis for the CIS; Hoth for Rebellion, and Endor for the Empire.)

Once the home planet is conquered, the player will be victorious. 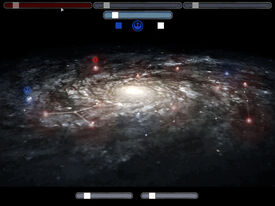 Galactic Conquest made its return in Battlefront II, with many of the original aspects from the previous game applied as well. Players still take turns attacking planets and earning control of them, but now they can make tactical decisions thanks to the map screen. Players start off with the simple units unlocked such as the Imperial Pilot and Stormtrooper for the Galactic Empire, or the Rebel Pilot and Rebel Soldier for the Rebel Alliance. In order for the player to unlock more units, they must enlist them for 1000 credits. They earn credits by being victorious in any battle; however, this time, instead of winning bonuses from controlling planets, players must buy them from the 'Bonus' tab. Credits are awarded depending on the planet players take over and whether they are the victor or loser of the battle. Credits are also determined based on the number of planets players have under their control. The more planets they have under their control, the more credits awarded every match.

There are no special attacks on planets this time as in the first Battlefront, as space battles are now present. If a player happens to run into the enemy fleet in open space or on the same planet, they will engage in a space battle. In these battles, players simply aim to destroy the enemy ship by destroying the targets, such as the communications array, or by dissolving its numbers to win. If the player is victorious, the enemy fleet is reset. If the enemy is victorious, the player's fleet will be reset. Players can also deploy several fleets at once if they want to go after numerous planets at the same time. If a player's fleet does get destroyed, they are allowed to construct a new vessel for absolutely no cost, as long as they have no other fleets under their control. Players may purchase additional fleets at any time for credits that they earn.

Renegade Squadron has a much different Galactic Conquest mode than the previous games, as players can only choose between the Rebels or the Imperials. There are now 16 planets in 4 different sectors, one of these planets are the players and opponents home planets, signified by the crown. The blue planets belong to the player, while the red planets belong to the enemy. The white planets are neutral, and can be captured by either side. If the player owns all of the planets within a quadrant, bonus credits will be added with the regular credits from the planets. Players also can purchase technology upgrades, such as more starfighters, to the increase of troops that can be present on a planet. Heroes can also be purchased, but can only be hired once all of the planets in the quadrant they're assigned to is fully under the enemy or players control, and each of them have different abilities, (Leia and Tarkin for example, decrease the price of credits for upgrades, while Darth Vader and Han Solo allow a health regeneration during battle.) There are 4 phases in the game that players go through: Treasury, Purchase, Movement, and Reinforce.

Once the player gains hold of the enemy home planet, or vice versa, the galaxy will belong to them, but they must first fight in space, and then on the ground.

Eilte Squadron has a very similar version to Renegade Squadron, but players can now play in the Clone Wars era and there are also mini campaigns with special equipment added or removed. Also, there are only 2 heroes and 3 sectors as opposed to 4, and there is only a maximum of 12 planets, although one planet, (Death Star) can only be played in the Galactic Civil War era.

Like Renegade Squadron, players go through 4 phases when playing.

As the game progresses, the enemy also advances their technology, move bigger fleets, and if that wasn't enough, can gain hold of weaker planets.

Once the player gains control of all planets except the enemies home planet, the enemy refuses to send troops to any planet, and will instead wait for the player to make their move.

Once the player sends forces to attack the enemy home planet, the enemy will hold a final counter offensive in a battle for the planet. If the player succeeds, they own the galaxy and win the game. If they fail, they must wait until they have a planet that contains a large troop count to try again.