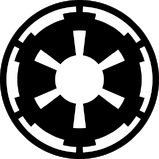 Rather than offering people newfound hope, the Empire instead became a tyrannical regime, presided over by a shadowy and detached despot steeped in the dark side of the Force. Personal liberties were crushed and the governance of everyday affairs was pulled away from the Senate and were instead given to unscrupulous regional governors.

Accompanying the growth of the Empire was an unprecedented military buildup. The many shipyards in the Emperor's domain churned out immense fleets of Star Destroyers and TIE fighters. The Imperial starfleet maintained order in the galaxy, a role previously undertaken by the Jedi Knights, an august order of protectors who were wiped out during the Emperor's ascent.

The Empire ruled through fear and its power hungry lieutenants and technocrats developed greater and stronger instruments of destruction to crush a rebellious populace. This philosophy culminated in the creation of the Death Star, a mobile space station with a prime weapon to destroy an entire planet once fully charged.

Despite the Empire's show of strength and extreme policies, small pockets of resistance banded together to form the Alliance to Restore the Republic. At first, the small number of freedom fighters seemed no match for the oppressive, stronger Imperial Military. Nonetheless, they managed to score an impressive victory with the destruction of the first Death Star at the Battle of Yavin 4.

Having proved itself a viable threat, the Rebel Alliance found itself under Imperial counterattack. The core group of Rebels spent three years relocating their hidden headquarters, before being routed in a crushing attack at the Battle of Hoth. A few short months later, the Rebels discovered that the Death Star was one of the first of many Imperial super weapons in development. Four years after the first Death Star was destroyed, a second was nearing completion over the distant moon of Endor. Intelligence gathered by Bothan spies informed the Rebel planners that Emperor Palpatine would be present to oversee the final stages of construction.

Thus an irresistible target was in place over the moon: the Empire's next great weapon, incomplete and vulnerable, and the head of the Empire himself, both in one place. The Alliance took the bait, the Battle of Endor was entirely designed by the prescient Emperor Palpatine to be the final confrontation in the Galactic Civil War. Palpatine however, failed to foresee the resourcefulness of the Rebels or the treachery of one of his most trusted aides - Darth Vader.

Palpatine was killed aboard the second Death Star by his apprentice Darth Vader and the battle station was destroyed. The Empire had been dealt a deadly blow and slowly but surely was brought down by the Rebellion.

Retrieved from "https://battlefront.fandom.com/wiki/Galactic_Empire/Original?oldid=80042"
Community content is available under CC-BY-SA unless otherwise noted.