"General Grievous was the Supreme Commander of the Separatist army. Once a feared warlord from the planet Kalee, he heavily modified his body using cybernetic implants to dominate his enemies in battle."
— In-game description

General Grievous is a Separatist Hero in DICE's Star Wars Battlefront II. He arrived on October 30, 2018 as part of the General Grievous Update. He originally cost 35,000 credits to unlock but this cost was removed in the Capital Supremacy Update.

General Grievous can be a menace to behold. Grievous possesses a large health pool and health regeneration. His lightsabers were stolen from the Jedi he has slain, and can be increased in damage with a Star Card. Grievous can also inflict more damage from behind than some of the other lightsaber wielders. However, he is the least capable lightsaber hero when it comes to blocking enemy blaster fire, as it will drain his stamina greatly. While taking on large groups of enemies can be risky, Grievous excels when targeting enemies individually and enemies can be knocked down or finished off when Grievous focuses on them with his Thrust Surge.

General Grievous can also lead the charge with his Unrelenting Advance ability, inspired by the iconic movement of his lightsabers in Revenge of the Sith as he begins his duel with Obi-Wan Kenobi during the Battle of Utapau. The Unrelenting Advance ability blocks all attacks in front of him and damages enemies who are unfortunate enough to be caught in the spinning turbine of four lightsabers.

However, despite his intimidating appearance as one of the game's largest villains, General Grievous cannot always be a tank and is known to be devious. Just as seen in Revenge of the Sith, when the odds are turned against Grievous, he will be quick to escape. This can be seen in his Claw Rush ability, where Grievous goes down on his four arms and two legs and rushes forward in a rapid motion. Grievous's Claw Rush can also be used to knock down enemies, who can be further damaged when Grievous steps back up, kicking his two feet into the air. This is especially useful against enemy heroes that Grievous faces off with.

"Surrender, and I promise you will die quickly!"
— Third emote

"Your screams are like music to my audio-receptors!"
— Fourth emote

"Hello there!"
— Voice Over

"Another world to conquer!"
— Upon spawning

"This will be easier than Dathomir!"
— Upon spawning

"I'm coming for you!"
— Upon using Claw Rush

"Show them the meaning of pain!"
— While in action

"I grant you a Jedi's death!"
— While in action

"The Kaleesh are not known for their mercy."
— While in action

"Make peace with the Force now, for this is your final outing!"
— While in action

"Temper, temper! You know where anger leads..."
— While in action

"Now. Devastation tactics!"
— While in action

"I am surrounded by idiots!"
— When outnumbered

"You should have retreated."
— When outnumbering the enemy

"Grievous: Master, I have instructed my army. Take. No. Prisoners.
Dooku: I have taught you well, my apprentice. "
— Banter between Count Dooku and General Grievous

"Anakin: Consider this payback for all the Jedi you've murdered!
Grievous: Perhaps you'd like to choose which of their lightsabers I kill you with. "
— Banter between Anakin Skywalker and General Grievous

"The Jedi Grand Master, at last."
— Banter with Yoda

"They will speak of your death for generations."
— Banter with Leia Organa

"A young Jedi, his weapon will be my trophy."
— Banter with Luke Skywalker

"Another lightsaber for my collection."
— Banter with Rey

"I shall eliminate this Wookiee."
— Banter with Chewbacca

"Not such a big deal, are you?"
— Banter with Finn

"Killing smuggler scum is beneath me."
— Banter with Han Solo

"So overdressed for someone about to die."
— Banter with Lando Calrissian

"How many arms does Grievous need?"
— Heroes vs. Villains announcer, when a Grievous player gets a 5-player killstreak

"Grievous makes today's Heroes suffer, as he delivers a crushing final blow."
— Heroes vs. Villains announcer, when a Grievous player gets the final game-winning kill

"Seems the arch-clanka Grievous has joined the battle."
— Republic announcer, when an opposing Grievous player spawns

"General Grievous has been spotted!"
— Republic announcer, when an opposing Grievous player spawns

A promotional image of General Grievous on Geonosis.

A textureless in-game render of General Grievous's model found in the game files several months prior to his release. 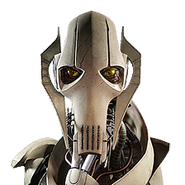