The Geonosians are the bug-like inhabitants of the planet Geonosis (where they can only be accessed by playing Hunt). They carry weapons such as the Sonic Blaster and have very little health. They are annoying in swarms, but alone they are easy hunting. Geonosians can be killed with two shots from a Blaster Pistol, one from the precision pistol. (If you have the damage increase). Geonosians have wings so they are very mobile.

This unit can fly and with their Sonic Blaster they do pretty good against you however they are easily killed. In Hunt Mode, they tend to win mainly because they swarm the area, coming into close contact, and you are armed with a sniper rifle, which isn't well-suited for close quarters combat.

Strategies in defeating a GeonosianEdit

In the games Edit

In the first Star Wars: Battlefront, the geonosians make their appearance on Geonosis: Spire, where they will assist the CIS. They are not a playable faction without mods and are relatively weak.

In Star Wars: Battlefront II, they appear on Geonosis: Dust Plains, and are only playable in the Hunt mode. Again, (outside of hunt mode) they will assist the CIS. They also appear in Story mode, during the event Tying up Loose Ends, under the command of Gizor Dellso. They appear at the end, as they and their leader try to escape, only to be all killed by the 501st Legion.

Though they do not appear in the PSP version of Star Wars: Battlefront II, they can be implemented using mods. 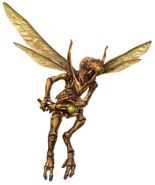 A Geonosian Sonic Blaster.
Add a photo to this gallery

Retrieved from "https://battlefront.fandom.com/wiki/Geonosian?oldid=86998"
Community content is available under CC-BY-SA unless otherwise noted.