"The things I do for that Princess."
— Intro Dialogue

Han is a great long-distance character with several combat abilities that allow him to overpower other hero characters as well as groups of enemy units. He is equipped with a DL-44 Blaster Pistol that deals more damage than the standard one.

Han Solo has three abilities. The first is Rapid Fire, which allows Han to fire his blaster pistol more rapidly and without overheating. Great against groups of enemies or enemy heroes.

The second is Lucky Shot, which is a charged-up blaster shot that has the ability to break through lightsaber blocks and lock on to soldiers and vehicles. It is extremely powerful, capable of taking out Imperial starfighters in a single shot.

His final ability is called Shoulder Charge. This short-ranged ability allows Han to sprint forward and "plow" into enemies to apply damage. This only works on his line of sight.

Han Solo was given a hero trait in the Rogue One: Scarif Update. Han's trait, "Smuggler", gives him increased damage drop-off distance, along with a very small increase in blaster damage at all ranges. This means that Han Solo's blaster will do an increased amount of damage at greater distances, enabling his DL-44 blaster pistol to be quite effective in both long- and short-range situations. Like all hero traits, killing enemies and heroes increases his trait level and the bonuses they give.

"Han Solo is a sharpshooter who quickly dispatches his enemies with the high power of his heavily modified DL-44 blaster. He's not afraid to charge into battle and finish the job with explosives if the going gets tough."
— In-game description

Han Solo returns in DICE's Star Wars Battlefront II, as a Hero for the Rebel Alliance.

Han Solo returns from Battlefront 2015 and plays similarly to the previous iteration. Han is a very capable ranged hero, able to dish out heavy damage with his modified DL-44 blaster pistol. Although he lacks the health and regen to go into extremely dangerous situations, he makes up for it by being able to output some the highest damage as a ranged hero character. His modified DL-44 can one-hit most of the default trooper classes at close range with a headshot (except Heavy), and can quickly chew through the health of enemy reinforcements and heroes with multiple shots.

Han possesses three abilities, the first being his Detonite Charge which can be used to wipe out entire squads of enemy troopers or knock back enemy heroes. His charge can be airburst or used as a player controlled explosive trap/mine.

Next is his Shoulder Charge ability, which can be used to knock down the first enemy he hits, or to flee quickly from a dangerous predicament. The ability can be used to open up enemies for further attacks, along with also being able to knock enemies off ledges in order to get an environmental kill.

Last is his Sharpshooter ability, which overcharges his blaster allowing it to fire rapidly without heat build-up for a few seconds. However, this ability limits Han's movement speed and reduces the damage per shot from his blaster pistol, although the resulting damage is still considerable.

"Use Han Solo’s Shoulder Charge to finish off enemies at range"
— First hint
"Han Solo can detonate his Detonite Charge at any time after throwing it by repressing the ability button"
— Second hint
"Han Solo is best played aggressively, using his high damage abilities to blast his enemies"
— Third hint

"I'm out of it for a little while, everyone gets delusions of grandeur."
— First emote

"Hokey religions and ancient weapons are no match for a good blaster."
— Second emote

"Han Solo, captain of the Millennium Falcon."
— Upon Spawning

"Nothing personal!"
— Upon using Shoulder Charge

"And you wonder why you're not invited to parties!"
— In combat, when the Beckett's Crew appearance is equipped

"The Rebels went that way!"
— When outnumbered

"Just pretend you don't see me!"
— When outnumbered

"Where's their main force?"
— When outnumbering the enemy

"My kind of odds!"
— When outnumbering the enemy

"Vader? I can take Vader!"
— Upon spotting Vader

"Come on Boba, what's the point of all this?!"
— Upon spotting Boba Fett

"Nasty cold you got there, pal!"
— Banter with General Grievous, when the Beckett's Crew or Corellia Escape skins are equipped.

"Let me guess, you live in a castle."
— Banter with Count Dooku, when the Beckett's Crew or Corellia Escape skins are equipped.

"Solo shoots last... a stunning display of marksmanship that will claim more victims every time he describes it."
— Heroes vs. Villains Announcer

Han Solo in his Hoth uniform on Hoth Battles

Han Solo as he appears in the Campaign misson General Distress

Promotional image of Han, Leia, and Luke in their Hoth outfits.

Han in his Hoth outfit in Battlefront II

Promotional image of a young Han Solo and stormtroopers on Kessel. 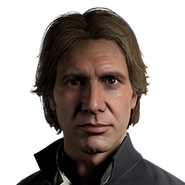 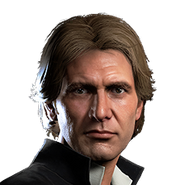 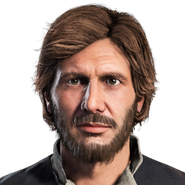