"I've made a lot of special modifications to this ship myself."
— Han Solo while piloting the Falcon in Battlefront II

The Millennium Falcon can only be piloted in the Fighter Squadron game mode as well as in the first phase of the Death Star expansion pack mode Battle Station. During a match, a hero vehicle Power Up will appear somewhere on the map and the first player to obtain it will be given a choice to spawn as the more powerful Millennium Falcon, which packs higher speed, health, and firepower than normal fighters, but comes at the cost of being a larger target.

In Battle Station, a well-piloted Falcon that focuses on destroying the Imperial Star Destroyer's weak spots in the first phase can greatly increase the Rebel's chances of winning the match, as the Falcon has the greatest weapon range and deals the highest damage to the Star Destroyer's weak spots of any Rebel fighter. Quickly finishing the first phase gives the Rebels more time to complete later phases, which are often more difficult.

Shield: The ship's first ability. Upon activation, a shield forms around the ship for a limited time. During this time, enemy blaster fire causes no damage to the Falcon, however, a well-timed enemy torpedo can destroy the shield and deal damage to the ship. Previously, there was an exploit with this ability that allowed the Falcon to crash into and defeat the Slave I but remain unscathed. This exploit was fixed in the Outer Rim Update, causing the Falcon to also be destroyed when it crashed into Boba Fett's ship regardless of whether the shield was activated.

Speed Boost: The Falcon's second ability that allows it to gain a quick boost in speed. This ability is useful to quickly get back into the fight or flee from enemy fighters.

Concussion Warheads: The ship's third and final ability. When used, the Falcon fires two torpedoes at an enemy ship that has been locked onto, dealing large amounts of damage. Like regular rockets and missiles, this can be avoided if the enemy player performs evasive maneuvers.

"Piloted by the renowned heroes of the Rebellion, Han Solo and Chewbacca, this heavily modified YT-1300 freighter uses its quad laser cannons to great effect against the Imperial Navy."
— In-game description

Promotional image of Han Solo and Chewbacca's Millennium Falcon over the Imperial Shipyards on Fondor. 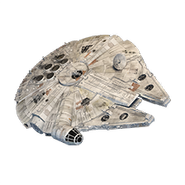