"The Heavy trooper can take out hordes of enemies when positioned well, but is less mobile."
— In-game description

The Heavy class is one of the four trooper classes that appear in DICE's Star Wars Battlefront II.

The Heavy class has the highest health of all four soldier classes, allowing it to absorb and deal immense damage at the cost of having decreased mobility as well as a slightly slower regen. This class has 200 health points, high durability, low mobility, and is equipped with powerful blasters and shields. A majority of their blasters take longer to vent.

Like all units, the Heavy's class level is determined by the experience earned and time played in game with the class. Star Cards for the Heavy class can be unlocked through Skill Points, one of which is earned each time the class is leveled up. Their unique Ability Card is Defender, which gives Battle Points when taking damage. The Heavy class uses heavy blasters that are unlocked by completing their respective milestones.

The Heavy has three unique default abilities. One of them is Combat Shield. When activated, the Heavy will deploy a shield in front of their upper body. The shield will protect the Heavy from incoming frontal blaster bolts from the waist up, but will still leave the sides and rear of the Heavy exposed blaster fire. This ability differs from the Personal Shield in that the Heavy is allowed to fire their primary weapon while using the shield. However, when activated the shield will slow mobility and remove the ability to aim down sights as long as the shield is up. The Combat Shield can be upgraded by a Boost Card.

Sentry is another of the Heavy's three default abilities. When activated, the Heavy equips a Z-6 rotary blaster cannon, allowing players to deal a large amount of damage quickly. Gradual health regeneration is also granted for the player when the ability is used, albeit slow. The ability does limit the Heavy's mobility, so players should think carefully when using Sentry. This ability is effective at a variety of ranges and can be utilized well both in the open and in narrow choke points.

The in-game icon for the Heavy class.

A clone trooper heavy of the 87th Sentinel Corps prior to The Chosen One Update.

Promotional material of the heavy B-1 battle droid.

A heavy battle droid using the sentry ability at Theed on Naboo.

A heavy assault First Order stormtrooper in sentry mode in The Graveyard on Jakku. 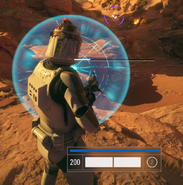 A Clone Heavy Trooper utilizing Sentry in the Naboo Palace.
Community content is available under CC-BY-SA unless otherwise noted.
Advertisement