In DICE's Battlefront, Hoth is depicted very much as it is seen in the movies, and then some. The planet's snowy plains and blue skies can be observed on Outpost Beta, while the planet's foreboding caves can be explored in Ice Caves. Hoth's harsh climate can be experienced on Twilight on Hoth. Several maps, such as Rebel Base, explore the white interior of Alliance buildings on Hoth, including their hangers, comm rooms, and medical bays.

The following is a list of maps set on Hoth and the modes they can be played in:

Rebel forces defending a base on Hoth.

An ice cave on Hoth, most likely once inhabited by a wampa.

GR-75 transport shuttles on Hoth waiting to deploy with Rebel forces in tow.

A beautiful morning on Hoth.

Two Imperial TIE Fighters flying over the surface of Hoth. 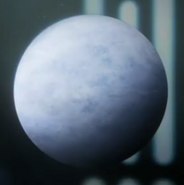 In DICE's Battlefront II, only one map, Outpost Delta, is set on Hoth. When playing Galactic Assault, there are two daytime settings: day and dusk. The day setting sees Hoth with its classic blue skies and harsh, white snow. The dusk setting, in contrast, paints the sky and snow in a beautiful orange hue, giving a glimpse of Hoth not seen in the movies.

The following is a list of maps set on Hoth and the modes they can be played in:

Rebel riders charging into battle on their Tauntauns