Hoth is a planet featured in the original trilogy of the Star Wars saga, as well as all games in the Star Wars: Battlefront Series. Among most species in the galaxy, Hoth isn't a very well known planet, due to its location in the Anoat Sector. Therefore, it is a rarely traveled portion of the Outer Rim territories. Hoth is the sixth planet in the Hoth system, and is covered with snow and ice. It is mostly known for its arctic weather, deadly wampas, and tauntauns (used by the Rebel Alliance as transport). One major battle that took place on Hoth was the Battle of Hoth, when the Empire had found the Rebels' secret base and caused them many casualties.

Hoth: Echo Base is a very open map and mostly long-range combat is required. Most of the map is outside on Hoth's frozen tundra. Many parts of Echo Base are playable on the map, including a hangar, the command center, and several corridors. There are also 2 bunkers, the Shield Generator, the Hangar, and about 4 main groups of trenches lined with turrets. Two AT-ATs give the Empire the firepower needed to destroy the Shield Generator which can be used as a spawn location, while the Rebels have an arsenal of four Snowspeeders inside the hangar. This map is slightly different between Star Wars Battlefront I and II. In the first, there is a tunnel leading to the Shield Generator from one of the bunkers. In the second, this tunnel is collapsed.

To be added, content from Star Wars: Battlefront: Elite Squadron. The map is very open, and has a AT-AT as a mobile command post. It is similar to the original maps from the first two games, although the Shield Generator can't be destroyed, and is instead a command post.

In addition the Hunt mode on Hoth takes place after the Campaign maps (for both BF I and II), with Echo Base in a semi destroyed state, overrun by Wampas. 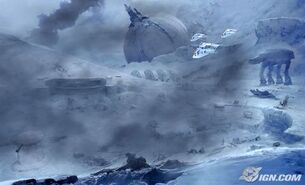 Hoth during the Empire's invasion on the Rebels' base.
Add a photo to this gallery

Retrieved from "https://battlefront.fandom.com/wiki/Hoth/Original?oldid=93089"
Community content is available under CC-BY-SA unless otherwise noted.