The Hyena-class Bomber, also known as a Hyena Droid, is a starfighter in DICE's Star Wars Battlefront II that functions as the Separatists' Bomber class. It can be played in the game modes Starfighter Assault, Hero Starfighters, and most Galactic Assault maps.

The Hyena Bomber serves as the heavy hitter for its team, being able to deal heavy damage to objectives, enemy starfighters, or infantry on the ground if not taken care of. Despite its firepower, it suffers from having decreased maneuverability compared to other ship classes.

With the Multi-Missile Lock ability, the Hyena Bomber targets up to three different starfighters or objectives in order to spread damage out to its enemies. The missiles lock on instantly and work well in making enemy starfighters scatter in their attempt to avoid the missiles.

The Hyena-class Bomber as seen in the Beta. 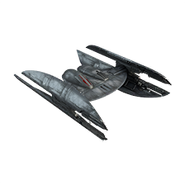 In-game icon for the Hyena Bomber. 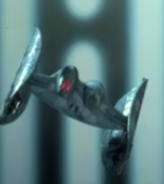