The IFT-X was a tank seen during the Clone Wars used by the Galactic Republic. Nicknamed 'The Jedi Starfighter of the Ground'. IFT-Xs were often employed by both the Jedi Council and the Republic; The latter able to make the use of its deft agility to avoid counter-attack and respond in like-fashion with its firepower. However, in their transition into the Galactic Empire, a majority of the TX-130s have been requisitioned to be used as a quick armored response to insurgency, designated as the IFT-T.

As the counterpart to the Trade Federation's AAT, both fighter tanks feature similar weapons operated by the pilot, but the IFT-X uses a beam turret.

Skilled pilots can use their superior maneuverability to dodge incoming rocket fire and keep at a safe distance with the range of their powerful cannons and missiles. The beam turret is a weaker choice against vehicles so the driver should use their missiles against enemy armor.

While tough, the gunner is exposed to enemy fire and the rear door can be struck for extra damage by a shrewd enemy. 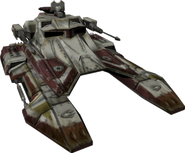 A IFT-X tank in action on Tatooine: Dune Sea.

A Battlefront 1 IFT-X and a Jet Trooper, on Rhen Var.
Add a photo to this gallery

Retrieved from "https://battlefront.fandom.com/wiki/IFT-X?oldid=94744"
Community content is available under CC-BY-SA unless otherwise noted.