The ISB Agent is an Infiltrator Reinforcement unit for the Galactic Empire in DICE's Star Wars Battlefront II. It was released on February 26, 2020 in The Age of Rebellion Update.[1]

This fearless agent of the Imperial Security Bureau works well in many situations. Her abilities are a mix of the Sith Trooper and the ARC Trooper's abilities.

She is armed with two RK-3 Blaster Pistols, one of which she can fire a Power Blast from. The Power Blast can lock onto enemy troopers and vehicles, and can correct itself midflight to hit them. Holding the fire button fires both blasters. Her elegant kicks replenish her health.

The Agent can run into and out of hotspots with Assault Training, which grants her damage reduction while sprinting and increased sprint speed.

Are there Rebel scum that are nearby your location, but they're all hiding? The Agent's Imperial Intel scans the four nearest Rebel scum, up to 10, increasing for every kill with this ability active.

Double Your Effort regenerates allies' base health, but can only be used when an ally is nearby. The effect also extends to friendly Heroes and Villains as well, and can completely heal them past their standard regen cap.

"The ISB Agent has a series of very fast and nimble melee attacks that allow her to quickly close in on her enemies."
— First hint
"While sprinting at full speed with ASSAULT TRANING active, the ISB Agent takes reduced damage."
— Second hint
"The ISB AGENT regains a portion of health with each melee kill."
— Third hint

The ISB Agent as she appears in the Collection menu 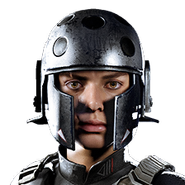