Edit
watch 03:38
The Story of Iden Versio
Do you like this video?
Play Sound

34 ABY, shot by Gideon Hask, aboard the Retribution

Black, greyed over by 34 ABY

Iden Versio is the main protagonist for the campaign of DICE's Star Wars Battlefront II. Born on Vardos, a world loyal to the Empire, Iden is the commander of the Imperial special forces unit Inferno Squad—a team as equally lethal in the air as it is on the ground. Iden commands Agents Del Meeko and Gideon Hask, two elite soldiers serving in Inferno Squad. Inferno is also supported by Iden's droid. Her father, Garrick Versio, is an admiral stationed on the Eviscerator and is Iden's commanding officer. Iden goes on to have a daughter, Zay Versio.

Iden Versio is also an Imperial Hero in the online multiplayer of Star Wars Battlefront II.

The campaign of Star Wars Battlefront II follows Iden Versio, the commander of Inferno Squad, an elite special forces unit of the Galactic Empire. She is ready to give her life for the Empire and end the hated Rebel Alliance once and for all until a fateful event changes everything. The last order given by a now-dead Emperor demands the purging of several planets, including her own homeworld of Vardos. Against her pleas, her father carries out the first order of Operation: Cinder and everything Iden thought she knew and trusted about the Empire is questioned.

Iden is a versatile hero whose vast amount of tools allow her to excel in combat from all ranges, be it short, medium or long. Her TL-50 is a deadly weapon with very high rate of fire with the ability to fire a deadly secondary fire which can take out three of the four default classes (the Heavy being an exception) and a cluster of enemies.

Stun Droid is a simple but very effective tool. Iden calls on her droid to stun enemies, which can chain to multiple enemies. It deals a small amount of damage and keeps them stunned for long enough while Iden dispatches of them.

Iden is the only character in Battlefront II to wield the Pulse Cannon, which functions similarly to its 2015 counterpart. The Age of Rebellion Update added the capability to fire the Pulse Cannon from the hip and allowed the weapon to fire without being fully charged.

Her Droid Shield is a very useful utility when surrounded by blasterfire which, in addition to blocking blasterfire, also prevents explosive like Han Solo's Detonite Charge from dealing damage to her. Activating this when at low health will greatly help her survivability while she regenerates health. However, lightsabers can pierce the shield.

"Iden’s Stun Droid can be avoided with a well timed evade"
— First hint
"Iden cannot use her Droid Shield while the droid is at distance to her"
— Second hint
"Iden is a versatile hero, able to deal with enemies up close and at distance with her array of weapons and her Droid"
— Third hint

"Hope cannot save them!"
— Third emote

"The Empire sends its regards!"
— In action

"They aren't ready for the fire that comes next."
— Upon spawning

"Every wildfire starts with a spark."
— Upon spawning

"They have hope, we have me."
— Upon spawning

"Let's light this room up a little!"
— Upon equipping Pulse Cannon

"Scouts spotted a small, green... thing. Shoot it!"
— Near Yoda
"Blasters beat sabers. Light up their Jedi!"
— Near Yoda
"We've got a young Jedi incoming."
— Near Luke Skywalker
"Hunt down the smuggler assisting our enemy!"
— Near Han Solo
"New target acquired! Tall, furry and dangerous!"
— Near Chewbacca
"A traitorous Senator is aiding our enemy!"
— Near Leia Organa
"Beware the man with the cape!"
— Near Lando Calrissian
"That girl, with a lightsaber, blast her!"
— Near Rey
"We've been fighting our whole lives. It's taken us too long to realize that we were fighting for the wrong side....We would like to help you if you'll let us."
— To Leia Organa, Royalty
"We fight so that others can live. And if we die, it better be for the same reason."
— To Zay, Inferno
"I wish you could see what I see..."
— Inferno, last words

Iden is the central figure on the standard edition cover of Battlefront II.

On her home planet, Vardos

Promotional image of Iden Versio aboard a star destroyer.

Iden and the rest of Inferno Squadron invade what seems to be the interior of a Mon Calamari Star Cruiser.

Promotional image of Iden Versio and another member of Inferno Squad.

Iden, her personal droid, and the two other members of Inferno Squadron

Promotional image of Iden Versio without a helmet.

Iden Versio in a campaign cutscene.

Iden and her squad witnessing the destruction of the second Death Star.

Iden Versio projected by a hologram.

Iden Versio projected by a hologram.

An older Iden Versio on Vardos.

Iden Versio without her stormtrooper armor. 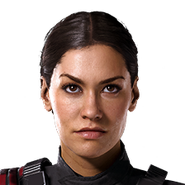 In-game icon for Iden Versio, used both in the campaign and multiplayer. 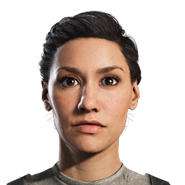 In-game icon for Iden Versio in the campaign, after her defection. 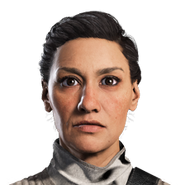 In-game icon for Iden Versio, used in the Resistance era.