The Imperial Engineer, also known as the Imperial Gunner or the Imperial Pilot (SWBFI), is the repairman unit for the Empire. His gun shoots a wide spray of shots that will kill easily from short range. The big advantage to him is his Fusion Cutter, which allows the engineer to repair damaged tanks, health and Ammo Droids, turrets and also grants them the ability to slice other people out of tanks. With the ability to dispense health and ammo as well, the Imperial Engineer is a very important part of the Empire's team, and there should be at least a couple on your team at any given time. (Equivalent- Engineer Droid, Rebel Smuggler, Clone Engineer)

On Hoth, and Rhen Var SWBFI

On all other SWBFI maps.
Add a photo to this gallery

The AT-AT Pilot with a SE-14r Blaster Pistol. 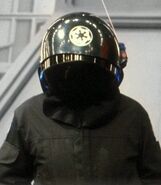 An Imperial Engineer on the Death Star.
Add a photo to this gallery

Retrieved from "https://battlefront.fandom.com/wiki/Imperial_Engineer?oldid=87100"
Community content is available under CC-BY-SA unless otherwise noted.