Imperial Officers, also called "Imp Officers" by Rebels during combat, are one of the two special units in the game only available to the Galactic Empire. He is a member of the Officer class, requiring the player earns 8 points before using him.

The Imperial Officer's primary weapon is the Sonic Pistol. It shoots fairly strong waves of sound at your enemies, causing moderate damage, higher than that of a Stormtrooper's rifle. The downside to this weapon is that it has a mere 35 shots, with 7 per magazine, the exact number needed to kill a Wookiee. The Sonic Pistol is also slightly inaccurate at long range.

The Officer's secondary weapon is the Mortar Launcher. It shoots projectiles a good distance and causes large, grenade-like explosions which are VERY devastating to enemy troops. When firing, the mortar can be charged, increasing both the range and the fuse length. It also has a large ammo capacity, 25 shots. It's also great against vehicles and turrets.

The Imperial Officer also has a Recon Droid and Rage, a buff which provides improved attack damage for nearby units when used.

Like the Dark Trooper the Imperial Officer does not change his skin on any map, but originally when the retired clone trooper is reading the 501st journal for Mustafar a different skin can be seen.

The in game skin for the Imperial Officer.

The original Skin for the Imperial Officer.
Add a photo to this gallery 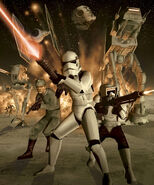 The original Officer model as seen on the left.

General Veers, an Imperial officer commanding an AT-AT during the Battle of Hoth in The Empire Stikes Back.
Add a photo to this gallery

Retrieved from "https://battlefront.fandom.com/wiki/Imperial_Officer/Original?oldid=87110"
Community content is available under CC-BY-SA unless otherwise noted.