"Precision and area attack are both qualities the Imperial Rocket Trooper delivers. Add the extra mobility from the jetpack and you understand the Empire's investment in these troopers."
— In-game description

Imperial Rocket Troopers are equipped with an improved E-11 Blaster Rifle. As their name suggests, they bring into combat with them a rocket launcher. The thrusters of their jetpack allow them to propel forward and upward for some flight.

The Imperial Rocket Trooper's E-11 deals increased damage as compared to the existing default blaster for the Stormtrooper, and can provide reliable firepower with its relatively low heat per shot and low venting time. The weapon's increased damage means that the Imperial Rocket Trooper is capable of outgunning most targets in single engagements and can deal even more damage by landing headshots against them; along with its Rocket Launcher to deal with tightly clumped groups of enemies. Combining this with the jetpack means that the Rocket Trooper can position itself behind or above enemies, and rain a hail of devastating fire upon them.

While the E-11 deals respectable damage at close-range, it suffers from having low end-damage, making the weapon unreliable in dealing with long-range targets and must close the distance in order to deal with them effectively. Another issue that the Imperial Rocket Trooper faces is its considerably low health for a Reinforcement, matching up with the Heavy with only two hundred health before Star Cards are applied. As a result it cannot take much punishment, and must resort to its mobility and cover in order to stay in the fight. If faced with unfavorable odds, it can use two of its abilities, Jetpack Boost and Jetpack Dash, in order to make a quick escape but can also depend on its dodge in order to quickly build space between an enemy or to close the distance with them.

Their original design in Mos Eisley 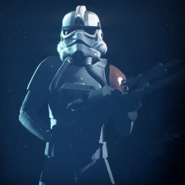 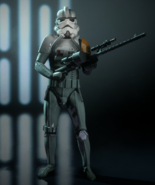 Former look and weapon of the Imperial Rocket Jumper. 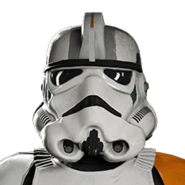 Original in-game icon for the Imperial Rocket Trooper, found in the Beta files. 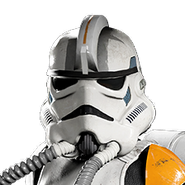 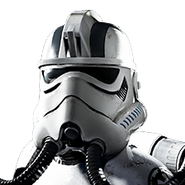 Rocket Trooper icon, as of the Age of Rebellion Update