Imperial Royal Guards are Imperial units who can spawn next to Emperor Palpatine as hero bodyguards in EA DICE's Star Wars Battlefront.

Prior to the Bespin DLC, Royal Guards weren't present, and Shock Troopers took their spots as Palpatine's bodyguards.

Two guards appeared in Return of the Jedi, where they stood at the elevator in Palpatine's throne room. Upon Palpatine's request, they left the room, and weren't seen again. They were also seen in multiple deleted scenes cut from the final film, including a sequence in which they point their Force Pikes at Darth Vader after he begins to Force Choke an Imperial officer, Moff Jerjerrod.

They also appeared in Revenge of the Sith, where they stood at the door of Palpatine's room as some of the first symbols of the new order. When Yoda appeared at the Emperor's offices in a last attempt to halt the machinations of the Sith Lord, these guards were defeated by a simple Force Pull.

The Imperial Royal Guards are playable Hero Bodyguards that can only spawn if Emperor Palpatine is the Hero. They can be spawned in as at the re-spawn menu if a position is available (there can only be two at a time).

The Royal Guards are armed with T-21 Heavy Blasters, Smart Rockets and a Homing Shot. Their T-21 is a superior version to the regular version. They have superior health compared to a normal player, but cannot regenerate their health, though Bacta Bombs do heal 10% of their health. They cannot pick up power ups. One should be careful in running around so one doesn't die, its also best to stay close to the player controlling Palpatine since the player gets bonus points for killing enemy while staying close to Palpatine. Since its the only way for a hero to kill vehicles/turrets such as the turbo lasers is with their guards Smart Rockets.

The Royal Guard T-21 has does 25 extra damage at close range and 3.5 extra damage past 50 meters. Its recoil and spread are also less than the normal weapon.

Smart Rockets should be used on groups of infantry, enemy heroes or Vehicles such as A-Wings or turrets. This is unique since one can use one and they have a recharge time similar to Star Cards, so if a vehicle is present, it should always be used on that vehicle/turret with Homing Shot being used on enemy infantry unless grouped together or for a quick and easy kill. Since Luke Skywalker can't deflect Homing Shots and Smart Rockets, it should be used on him at any possible moment, since it can inflict heavy damage on him and can prove easier for other players to defeat him.

Homing Shot functions the same as the Star Card. It is best used on in the open infantry, or players in Personal Shields or Squad Shields for quick and easy kills. As stated above, Luke can't deflect Homing Shots, making them useful for heavy damage against him. Even after Emperor Palpatine has been killed, players can still play as Royal Guards as long as they don't die.

Royal Guards could be defeated much easier than the Rebel Honor Guard prior to the February 2016 update, which caused their damage and health to be increased.

Despite being bodyguards, players don't need to follow Palpatine. 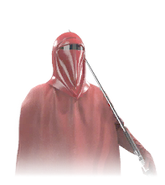