Ashes of the Empire

Inferno is the last campaign mission in the Resurrection DLC of DICE's Star Wars Battlefront II. The DLC was added in the 1.0 Patch and released in Week 2 of The Last Jedi Season.

Iden, Shriv, and Zay are in stolen First Order TIE fighters approaching a Resurgent-class Star Destroyer, which is hovering above the capital city of Vardos. Iden orders Dio to scan for any vulnerabilities in the destroyer. Iden asks if there was any way to board it, and Zay replies that there are too many troopers and that they would be slaughtered even before they boarded. Shriv remarks that the First Order could be the Resistance’s largest threat. Iden informs him that they will just board the destroyer, steal the information, and leave. Zay queries about a landing zone but Shriv vetoes the idea, claiming there isn’t enough space for their TIE fighters. Suddenly Zay panicks when a First Order general orders “Delta Six” to stay on Vardus. Shriv estimates they will lose incognition, and Iden commands them to open fire. The group shoots down a few TIE fighters, and Iden orders Dio to look for a way in. The group clears the skies while Dio frantically tries to search for a way in. Shriv remarks it’s “just like old times”.  Finally Dio figures something out by the engine, where a heatsink is vulnerable. Iden dives to the back of the destroyer and incinerates the heatsink, before entering into the destroyer’s engine. Iden’s TIE fighter is struck by a bolt of energy and crashes to the ground. Iden and Zay arrive and find Shriv buried in a pile of rubble.

The group finds a way into the ship and Iden orders them to search for anything that could help the Resistance. Zay discovers an armory where they steal several blasters and equipment. Zay remarks that the weaponry is heavy, and Iden says “heavy will help”. Iden enters a corridor and starts to shoot Stormtroopers with the heavy minigun. After passing through a corridor, Zay will shout that they really don’t want anyone to enter the room. Iden and Zay take heavy blaster fire but cut a path of death through the enemy forces. They arrive at a nondescript chamber and Iden tells Shriv that this is the entrance. Shriv replies he will be there very shortly.  Iden orders Dio to hack the door. Iden and Zay enter the room. Shriv is there waiting for them. They look at a map on the wall and conclude that the First Order are on Jinata. They flash through different diagrams and Shriv stops on a First Order dreadnought. Zay, being cynical, says that sounds bad enough, but Shriv confirms their fears, saying he heard only rumors but was told by Leia that they were real. Zay replies they need to find a weakness in the system. Iden orders Dio to hack into the mainframe and upload the schematics to the Resistance. Shriv says that they are stranded until the ship leaves, which could take hours. Iden says they will find us a ride out, and Shriv gets nervous. Zay asks what the plan is, and Iden says they will rip the ship out of hyperspace. Zay figures out why Shriv is always nervous. Iden fights through a phalanx of stormtroopers, taking heavy fire but striking them down. Along the way, Zay will steal several blasters from the ship armory. Iden will arrive at a control panel and accidentally trigger a silent alarm.

After entering the ship hangar, Shriv will give a status update that the Resistance are attacking the ship. Iden suggests the idea of planting detonation charges on the ship generator and Zay agrees. While Iden defends Zay from the stormtroopers, Zay plants the ion detonation charges on the hyperdrive. After the skirmish, Zay reports that the detonators are set. Iden contacts Shriv to let him know the charges are planted, and Shriv says he found a way out but it will not be easy. Iden arrives at the Security Computer and defends Zay while Zay plants even more charges on the backup generator. Finally, Zay puts the last charge down and Iden orders Dio to hack into the computer and change the stormtroopers’ path. Iden will then move to the hyperdrive core and plant the last detonator on the core.

Suddenly, Zay gets seized behind the back by Hask, who will cruelly remark, “that’s the Iden I remember.” Zay falls into the pit but then gets caught by Iden at the same time. Zay hands Iden Hask’s gun and Iden shoots Hask, killing him. Hask also shoots Iden, but overbalances to his death. Iden detonates the charges as they walk away. With her dying breath, Iden asks Zay to send Dio to the resistance base, before sacrificing herself for the good of the galaxy. Shriv then arrives and picks up Zay, who transmits the schematics to the Resistance base. On D’Qar, Zay remarks that this is just the beginning, as the screen fades to black.

You will start along with Zay and Shriv inside a stolen TIE fighter. Follow them until the First Order contacts you. Open fire on the enemy ships. Protect Zay and Shriv by shooting enemy TIE fighters while they find an entrance. Shoot the heatsink and enter. A bolt of energy will hit your fighter and your fighter will fall to the ground, which triggers the first cutscene.

Defend Zay again while Zay plants more charges. Move to the hyperdrive core and plant the last charge. Zay will get seized around the back by Hask. Rescue Zay before shooting Hask, killing him. Press to detonate the charges to trigger the ending cutscene and end the mission.

The true scale of the First Order's plan finally comes to light. 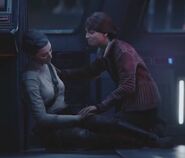 Inconspicuousness at its finest.

The truth is revealed.

Zay "borrows" some of the First Order's weaponry.

An eye for an eye.

Finishing what they started.

Zay's worst nightmare.
Add a photo to this gallery
Retrieved from "https://battlefront.fandom.com/wiki/Inferno?oldid=82241"
Community content is available under CC-BY-SA unless otherwise noted.