Jango Fett is a Mandalorian bounty hunter that appears as a Hero unit for Confederacy of Independent Systems in Pandemic Studios' Star Wars: Battlefront II. In the game, Jango is one of only two heroes, the other being Boba Fett, that have a jetpack, allowing him to sail out of battle quickly. As for weapons, players can utilize a number of weapons that Jango is equipped with, including a Flamethrower, Wrist Rockets, Time Bombs, and a Precision Pistol, which Jango is seen dual wielding in the manual for the PSP version of Star Wars: Battlefront II. 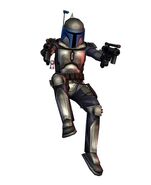 Jango Fett is shown in the background of the Singleplayer Menu