The Jedi Order has been the protector of the Galactic Republic for tens of thousands of years.

In Star Wars: Battlefront I, there are Jedi Hero NPC units that appear on the maps as high-health enemies capable of deflecting most incoming fire and surviving repeated grenade explosions. There is one for each side for balance.

In Star Wars: Battlefront II they appear as an enemy faction during the campaign mission Knightfall and some subsequent missions. Being lightsaber-wielding enemies, they are deadly at melee range and their force sensitivity grants them impressive agility. They can kill most infantry units in just a few saber strikes and are also able to deal major damage to heroes.

The Jedi Protectors are one of the hardest enemies in the Jedi Temple to take down. They have very high health and each one can block nearly all incoming fire for extensive periods of time. These Jedi which are only found in two missions in Star Wars Battlefront II Naboo - Imperial Diplomacy and Knightfall

Jedi protectors are the best at blocking incoming fire and in numbers can easily overwhelm regular infantry units quickly so it is best to try to dispatch them as quickly as possible before they are able to cause any major damage. The best units to use against them are Jet troopers and Clone Commanders. Or in the Imperial campaign the quickest way to take down this threat is with a Clone Commander or Darth Vader.

A Protector.
Add a photo to this gallery

The Jedi Master is an uncommon Jedi enemy and comes in three main variants in the game, all are the same except in the weapons they wield. All wear a light brown tunic and have blue Lightsabers. The first version has a single lightsaber, the second version has has two sabers, and the third version has a doublesaber. The Jedi Masters have two attacks: a normal saber attack and the Saber Throw, both of which are very similar to Darth Maul. In terms of health the Master is second only to the Protector, and is very hard to take out, even with Darth Vader. Furthermore, they are often encountered alongside Jedi Knights and Jedi Padawans. 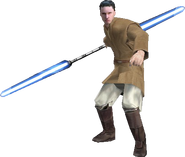 A Jedi Master.
Add a photo to this gallery

Jedi Knights are common Jedi enemies and are tougher opponents to beat compared to the Jedi Padawans. Their lightsabers can cut down most infantry units in just a few strikes. They appear in the Jedi Temple and Naboo missions. They are relatively easy to beat when they are confronted alone but are otherwise a major danger when encountered in groups. The quickest way to eliminate a Jedi Knight is with mines, rockets or other explosives. Jet Troopers and Dark Troopers jetpacks are useful when fighting against Jedi Knights. Another way to take them down is using the Clone Commander's Chaingun or the Clone Trooper's Elite Rifle and Precision Pistol, Clone Heavy Trooper or Anakin Skywalker.

There are two versions of Jedi Knights, one is this one on above with the single bladed Lightsaber, the other is wielding a green doublesaber in the gallery. 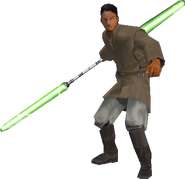 Double-bladed Version.
Add a photo to this gallery

Jedi Padawans are very common Jedi enemies that appear only in three missions: Coruscant - Operation: Knightfall, Naboo - Imperial Diplomacy and a single one in Death Star - Prison Break. They are usually found in groups and are rather dangerous due to their sheer numbers. When confronted individually, though, they are less of a threat, you can usually take them out in two bodyshots (or one headshot). They wield two green Lightsabers and have an attack which is similar to Aayla Secura but don't have a Saber Throw ability or any Force ability but the do have the jump attack ability which is also deadly.

In this section of the campaign the Padawans appear in large numbers and are armed with two green Lightsabers and form a major threat when fighting alongside the Jedi Masters. Do not let them get close to you.

Queen Apailana of Naboo is protected by an escort of Jedi, some of them Jedi Padawans. You should still be able to take them out in one or two shots without too much of a hassle. They often fight alongside the Jedi Protectors.

This level contains a single Padawan all by himself. He takes quite a few shots to destroy, but he won't leave the hanger bay. Take care to stay clear of his Lightsabers as he can kill you easily.

The Jedi Runner is not found anywhere in the game and attempting to load this unit in will crash the game.

Ability-wise, the Jedi Runner wields two blue lightsabers and can use the Force Push ability.

Retrieved from "https://battlefront.fandom.com/wiki/Jedi_Order?oldid=97927"
Community content is available under CC-BY-SA unless otherwise noted.