"The Jet Trooper is highly agile as well as versatile. On the ground or in the air, against troopers or vehicles - the Jet Trooper handles anything with ease."
— In-game Description

The Jet Trooper is the Aerial Reinforcement unit available for the Galactic Republic in DICE's Star Wars Battlefront II.

The Jet Trooper carries a powerful DC-17 blaster pistol into battle alongside a precise rocket launcher. Their jetpack allows for some flight with thrusters that can propel him forward and upwards. His Phase I armor is donned in black markings while his Phase II armor is donned in red markings.

The Jet Trooper's DC-17 is an incredible powerful weapon, with high damage and considerably rapid fire rate meaning it can easily outgun most opponents that attempt to engage in short-range. The DC-17 is also quite capable of engaging enemies at long-range, since the weapon's minimum damage is comparable to the maximum damage of the default Assault blaster. Scoring headshots with this weapon can prove devastating towards enemies, especially towards other Reinforcements or Villains. Combined with the Rocket Launcher and jetpack, the Jet Trooper can prove to be quite a formidable foe against enemy vehicles as well.

While the Jet Trooper has a powerful weapon, he suffers from having considerably low health for a Reinforcement, matching up with the Heavy with only two hundred health before Star Cards are applied. As a result he cannot take much punishment, and must resort to his mobility and cover in order to stay in the fight. If faced with unfavorable odds, he can use two of his abilities, Jetpack Boost and Jetpack Dash, in order to make a quick escape but can also depend on his dodge in order to quickly build space between an enemy or to close the distance with them. 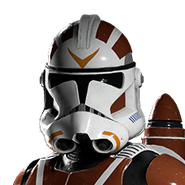 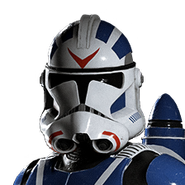 The Phase I Jet Trooper shown in promotional content.
Add a photo to this gallery
Retrieved from "https://battlefront.fandom.com/wiki/Jet_Trooper?oldid=84537"
Community content is available under CC-BY-SA unless otherwise noted.