The Jet Trooper is one of the two special units that only the Galactic Republic can access. The jetpack they possess lets them fly for a short period of time allowing them to cross maps with ease. The Jet Trooper's EMP Launcher is a deadly weapon, against both droids and humans. The Commando Pistol they also are equipped with has a much faster firing rate than the original Galactic Republic blaster pistol. If the Precision Pistol is achieved, this unit can be very formidable. Overall this class can change the tide of any battle, if played right. Also, unlike most other units, the Jet Troopers, along with Dark Troopers of the empire, can survive a long fall without taking any damage.

Originally in both main games before being changed to green.

A Jet Trooper on Naboo.

A Jet Trooper with an EMP Launcher.

A Jet Trooper on Kamino. 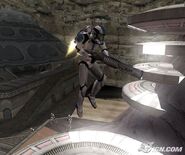 A Jet Trooper attacks from the sky.

A Jet Trooper on Mustafar.

A Jet Trooper on Cloud City from Star Wars Battlefront I.

An original Jet trooper from Star Wars Battlefront I.

Another original Jet trooper from SWBFI.

A Jet Trooper on Mos Eisley in the Battlefront Extreme 2.2 MOD.
Add a photo to this gallery

Retrieved from "https://battlefront.fandom.com/wiki/Jet_Trooper/Original?oldid=89409"
Community content is available under CC-BY-SA unless otherwise noted.