"'Reckless, aggressive and undisciplined.' Pretty much sums it up."
— Intro dialogue.

Jyn Erso is a hero for the Rebel Alliance in DICE's Star Wars Battlefront. She has three abilities that allow her to be effective at long- and short-range combat. She is available to owners of the Rogue One: Scarif expansion. She was added in the update of the same name.

Jyn is a rather fast character that is meant to infiltrate enemy fortifications by sneaking in and then taking everyone out. She can use powerful abilities to her advantage, although her health is only moderate, making her a hero who can take few shots. Use her Sonic Imploder first to lower the enemy's armour and use her rifle configuration to deal massive damage to enemy heroes. Her truncheon surge is helpful for taking out individual enemies at close range and her Sonic Imploder can blind, decrease armour and deal damage so use it before attacking the enemy. Her pistol deals good damage so use it against multiple enemies and use rifle configuration when taking out high health enemies such as heroes and their bodyguards. Be careful however when you use the Sonic Imploder, because the enemy could have used a Bacta Bomb prior to the explosion. Overall, she is best used for sneak attacks or hit-and-runs, since she is fast and quite deadly at any range.

One advantage Jyn has is that, unlike the vast majority of heroes, she is not immediately distinguishable from generic rebel soldiers depending on the map she's being used on. Thus, she can be used in an effective sneak attack since Imperial players make the mistake of assuming she's just another rebel.

Rifle configuration: The Rifle Configuration allows you to toggle a barrel extension on your A180 Blaster Pistol. This extension will transform it into a blaster rifle with a high rate of fire, While the Blaster Pistol is very effective on distant or high-health hero targets with its high damage, the Rifle Extension should be used to quickly dispose of stormtroopers or close-range targets.

Sonic Imploder: The Sonic Imploder is a multi-effect grenade that will damage, blind, and temporarily reduce the armor of Jyn’s enemies. The effect varies based on distance from the grenade. Enemies close to the grenade explosion will take high damage. The flash will affect enemies at a medium distance, while enemies at a long distance will have their armor reduced.

Truncheon Surge: Jyn can strike forward in a short melee attack that can be chained together as long as she has charges available. Since this ability is dependent on charges, there is no direct cooldown restriction. Once Jyn is out of charges, she will have to gain back her 3 base charges using her trait, Truncheon Charge. She can have a maximum of nine Truncheon Surges.

The Truncheon Charge allows Jyn to passively gain charges for her Truncheon Surge. This trait will allow her to keep up in close combat for a longer time. The more charges Jyn builds up, the more enemies she can take out by chaining together higher number of Truncheon Surges. A player that can effectively time this trait with actions will find Jyn to be a powerful hero.

"I have something for you!"
— Upon using Sonic Imploder
"Some added firepower..."
— Upon switching to Rifle Configuration
"I'm resisting arrest. Again."
— Upon killing a standard trooper
"I will never accept the Empire!"
— Upon attacking 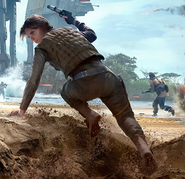