Kashyyyk is the heavily-forested planet seen near the end of Episode III: Revenge of the Sith. It was first seen when we see Yoda discussing issues with the Jedi Council while helping the Wookiees, the indigenous inhabitants of the planet. Before then, it has been mentioned numerous times in the Expanded Universe, and was originally going to be in Return of the Jedi and The Phantom Menace, but George Lucas decided that Endor and Naboo were better choices. Later, Kashyyyk is one of the places where Order 66 is first issued, and is the earliest point in the story where Chewbacca appears. Recognizable features include the wooden platforms that cross the bay and the tree branches. Long-range combat is unavoidable, but the addition of tanks and speeder bikes makes short-range possible as well. In addition, the attackers can shoot the control panel to a gate in front of the main base of the defenders. The gate will then collapse, allowing the invading tanks to enter the compound.

In Star Wars: Battlefront: Renegade Squadron, the northern area of the map beyond the Sea Wall is blocked off and the command post is not present.

501st Journal Intro -- Kashyyyk - A Line in the SandEdit

"When we arrived on Kashyyyk, things were just as bad as we'd feared. The droids had us outgunned, outmaneuvered and outmanned by a five-to-one margin. What none of us had counted on was the Wookiees. We'd all heard the stories, of course, but we'd never fought next to them, never seen them rip apart a droid with their bare hands. They were magnificent. Even so it was still a suicide mission. At least it was, until Master Yoda arrived. Then it became a battle -- a winnable battle."

501st Journal Outro -- Kashyyyk - A Line in the SandEdit

"With the timely arrival of Master Yoda, the 501st was able to hold the line against the Seps on Kashyyyk. We left as heroes. Years later, we'd return as conquerors." 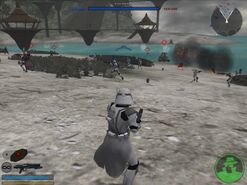 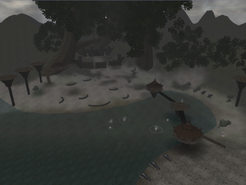 An aerial view of the Beachhead.

Kashyyyk.
Add a photo to this gallery

Retrieved from "https://battlefront.fandom.com/wiki/Kashyyyk:_Beachhead?oldid=96726"
Community content is available under CC-BY-SA unless otherwise noted.