Ki-Adi-Mundi is a Cerean member of the Jedi Council, and one of the top authorities therein. In the films, he plays a very small role, occasionally giving an opinion about a tactical maneuver. He is also seen in the sequence in Star Wars: Episode III: Revenge of the Sith, when the Jedi commanders are being shot down by their battalions of clones. In this scene, Ki-Adi-Mundi is seen leading Commander Bacara and the 21st Nova Corps of the 4th Sector Army through a smoke-covered city on the planet Mygeeto. He is killed posthaste by the men serving under him. In the game, Ki-Adi-Mundi is effective against individual heroes because of his access to Force Pull. He is credited as being voiced by Corey Burton, with voice clips present in the in-game files. However, a glitch makes Ki-Adi unable to speak. 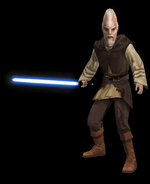 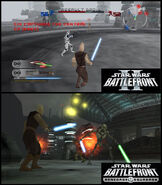 Retrieved from "https://battlefront.fandom.com/wiki/Ki-Adi-Mundi?oldid=97925"
Community content is available under CC-BY-SA unless otherwise noted.