"Komari Vosa was once an excellent pupil, if a bit unstable" - Count Dooku

Komari Vosa is a rogue dark jedi who was once a jedi and apprentice to Count Dooku.  She lived on Kohlma which is on one of the moons of Bogden.  She is the mistriss of the Bando Gora.

Being a jedi and a sith, she is well versed in lightsaber combat and force abilities.  She weilds two crimson lightsabers that have curved hilts.  She is very acrobatic and can preform many flips in a row.  After leaving Dooku, she was subject to the Bando Gora, where she eventually submitted and became their leader, practicing their ways.

She has very advanced force capabilities, especially mind control and telepathy. She can sense things lightspeeds away and can sense what life forms are near.

She can block blaster bolts when she is not attacking.  She will fling her lighsabers and results in an insta kill.  She can also use the force and hurt enemies this way.  She can use the force to jump at great lengths.

In the GCW era, she takes the form of a ghost, utilizing the same abilities.

She does not directly appear in any Battlefront game.  Rather, she appears in Star Wars: Bounty Hunter as one of the villians.  She is implemented into many mods in the Battlefront series.  She will mimic all of Aalya Secura's abilities in SWBF2. Vosa is only seen so far in one mod for SWBF1, that being Kohlma: Moon of the Dead.  She will have both lightsabers but is subject to the limited jedi animations. She has extra animations imported from SWBF2. 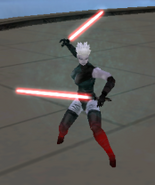 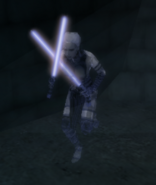 Add a photo to this gallery
Retrieved from "https://battlefront.fandom.com/wiki/Komari_Vosa?oldid=70509"
Community content is available under CC-BY-SA unless otherwise noted.