The Low Altitude Assault Transport (LAAT) Gunship, also known as the Republic Assault Gunship, is an aerial gunship and infantry transport for the Galactic Republic. It was later recommissioned as part of the Rebel Alliance's meagre forces as the Alliance Assault Craft. The ship in both Battlefront games is used as a troop transport.

It has many different slots that can each hold one person. This means that the ship will re-heal very quickly if it is full of pilot class units. It has a lot of health in the first place, making it a force to be reckoned with. Almost every unit has a gun, making this ship very deadly to foes. The best feature of this ship, however, is the fact that it acts as a spawn point if parked in the enemy hangar. This is very nice, but you will need a lot of pilots to heal the ship with their fusion cutters while it is in the enemy hangar. (Equivalent- Sentinel-class Landing Craft, Droid Gunship)

A custom LAAT/i Gunship flies over the Kashyyyk: Islands.

A LAAT/i in space battle.

A LA-AT/i in a enemy hangar.

A gunship burning over Kamino.

A variant of the LAAT (the LAAT/c) commonly known as the Republic Dropship, which is designed to carry AT-TEs. 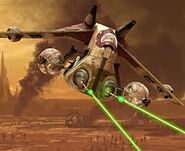 A Gunship over Geonosis.

A LA-AT/i Gunship landing during the battle of Utapau.
Add a photo to this gallery

Retrieved from "https://battlefront.fandom.com/wiki/LA-AT_Gunship?oldid=100537"
Community content is available under CC-BY-SA unless otherwise noted.