"The Low Altitude Assault Transport (LAAT), is a gunship used by the Grand Army of the Republic during the Clone Wars. Its primary role is to offer air-to-ground support for the Republic against the Separatists."
— In-game description

The Low Altitude Assault Transport, also known as the LAAT-series gunship, returns in DICE's Star Wars Battlefront II as a playable Artillery vehicle accessed by spending Battle Points. Unlike the original games, the LAAT cannot be directly controlled. Instead, the player operates one of the gunship's turrets as it orbits the battlefield similar to the U-Wing.

Also like the first game, the player can be killed while operating the turrets by an accurate or long range weapon.

Render of the LAAT Gunship

A LAAT on Naboo

A player operating the LAAT's turrets in Galactic Assault

A damaged LAAT on Kashyyyk in Supremacy

A LAAT awaiting Republic troops to board on Felucia 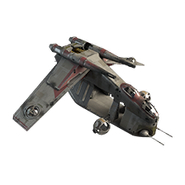 In-game icon for the LAAT
Community content is available under CC-BY-SA unless otherwise noted.
Advertisement