Edit
watch 02:05
Wiki Targeted (Games)
Do you like this video?
Play Sound 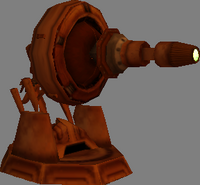 The LR1K Cannon, also known as the Sonic Disruptor Cannon and in Star Wars: Battlefront as the Geonosian Turret, is a large brown turret that uses similar projectiles to that of the Geonosian's Sonic Blaster and the Imperial Officer's Sonic Pistol.

The LR1K Cannon is not very effective due to its sonic waves only dealing very little damage to vehicles. If it is fired directly at infantry, it will send them tumbling back one meter, but overall very useless in battle. It is unique, however, in the fact that when destroyed, it will automatically repair itself without an Engineer.

Geonosian Turrets are only present on one map, Geonosis: Spire. Exactly ten total are set in decent spots, most in a circle surrounding the Spire. The damage from these turrets varies from which port of the game one is playing. It can range from completely useless as it barely does damage to infantry and none to vehicles and to being able to oneshot infantry and deal moderate damage to vehicles.

The LR1K Cannon, as it's called in Battlefront II, is only seen in three spread out areas on Geonosis: Dust Plains. Compared to its Battlefront I counterpart, the LR1K Cannon is much more useful on the battlefield. Its damage has increased immensely, taking only two shots to kill enemy infantry. This cannon causes moderate damage against AT-TEs, and requires a bit of time to take them down. The LR1K's accuracy is very good with its small crosshairs and clear view. The range of the LR1K is much improved, especially compared to the Battlefront I version. Enemy troopers can be killed from a long distance, but are difficult to kill when moving. Infantry at close range can take normal damage without being directly hit due to its shockwaves.

This turret is not to be confused with the Geonosis Turret, a mod turret of a similar name.

A LR1K Cannon in use.

LR1K Cannon in use in Star Wars Battlefront 1